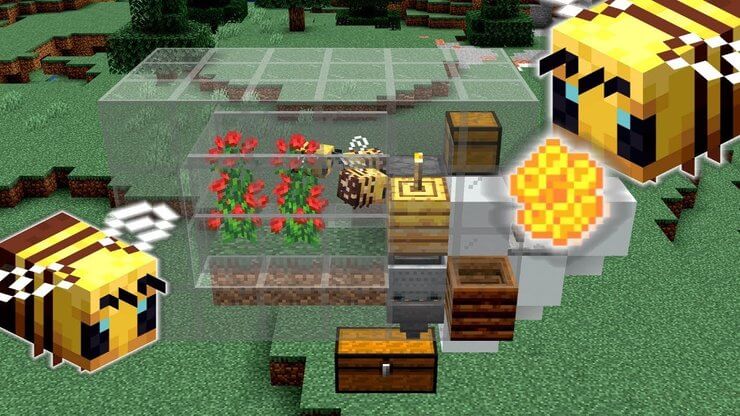 Cutting a Bee Nest or Beehive with a pair of shears in Minecraft will yield Honeycomb. Be careful since grabbing the honeycomb will enrage all of the bees inside. Beehives, Candles, and Waxed Copper are all items that can be made with honeycomb.

Place a blazing campfire under the honey-filled block before harvesting it for the most straightforward way for players to acquire honeycomb from bee nests and hives throughout their Minecraft world.

The biggest challenge in collecting honeycomb is that it makes bees hostile toward the player, even though it is essentially pretty easy to acquire.

Similar read: What Do Axolotls Eat In Minecraft?

The bees inside a bee nest or hive will typically become enraged and turn against the player if the honeycomb is taken from it. Below you can see how to get Honeycomb in Minecraft:

The process to get Honeycomb in Minecraft

Place a blazing campfire under the honey-filled block before harvesting it for the simplest way for players to acquire honeycomb from bee nests and hives throughout their Minecraft world.

Finding a Bee Nest with honey inside is the next step. Around the planet, bee nests appear randomly in trees, and bees constantly buzz nearby. You can’t harvest a honeycomb until it is filled with honey, even if you find one.

The bees in a Bee nest will disperse during the day when it is not raining to find pollen. The honey level of the nest will also increase by one each time a bee visits and departs from it.

When the honey level reaches five, you will notice honey oozing out of the Nest. It is now prepared for use.

Use your shears on the nest as you get closer to it. Its honey level will drop to zero after the Honeycomb splits into three sections. However, care because if you harvest from a Bee Nest, all the bees within will also emerge and begin hunting you.

They won’t let up until they sting you, which will cause immediate damage and poison you for a short while. Repeat this procedure as often as necessary to collect the entire honeycomb you desire.

Similar read: Minecraft Maps: How to Download and Install?

As long as bees are in the neighborhood, bee nests won’t perish. You can prevent upsetting the bees by starting a fire right beneath the Nest or a campfire within five blocks of it. Bees are calmed by the fire’s smoke, which prevents them from attacking you.

How to use Honeycomb in Minecraft?

Honeycomb is used in several different crafting techniques. To start, you can construct a beehive out of your honeycomb. Beehives function precisely like bee nests, but you may put them wherever.

Fill the top and bottom rows of your crafting table with planks, and the middle row with honeycomb, to create a beehive. When set on the ground, candles serve as a light source, but you must light them with steel and flint. Place one piece of String over one honeycomb to create a candle.

You can create a Honeycomb Block by arranging four pieces of honeycomb into a square anyplace on your crafting table. This block is entirely ornamental and has a honeycomb-like pattern.

Beehives don’t come with bees already inside, and you need to wait for them to find the hive naturally or use flowers to attract them. Three bees can live in a Beehive at once.

What use does honeycomb provide in Minecraft?

In Minecraft, beehives, the artificial equivalent of a bee nest, are primarily created out of honeycomb. These hives are much more readily available and appear much cleaner and more immaculate than a wild bee nest. Beehives can be manufactured using wood and honeycomb.

A player must use a silk touch tool to collect bee nests to add them to their survival inventory, which might take a long time, especially early on in the game.

Additionally, honeycomb is used to make decorative blocks of honeycomb, which look incredibly stunning when used as decor on bee or honey farms. One of the essential components of Minecraft, honeycomb, is highly sought after by gamers.

How to get honeycombs without enraging bees in Minecraft?

It is most straightforward for players to harvest honeycomb from bee nests and hives in their Minecraft environment by lighting a bonfire underneath the honey-filled block first. The bees won’t be able to assault the player by suddenly emerging with inflamed eyes.

For this technique to work, smoke must be visible coming through the top of the nest or hive, however, if that is not the case, the player is welcome to cut their honeycomb with a pair of shears using the block.

Currently, the only tool that can remove the honeycomb from filled hives is a pair of shears, and for the honeycomb to fall from the hive, it needs to be dripping with honey. Players can also place a bottle on a bee nest or hive full to obtain honey.