Before diving further into phone features, it’s worth knowing that the phone packs 7 beautiful stock wallpapers for the users. You can download Vivo IQOO stock wallpapers from our Google drive link right below.

The smartphone legend Vivo launched its pretty impressive flagship Vivo iQOO in August this year. The phone came loaded with a 6.41-inch touchscreen display with a resolution of 1080×2340 pixels and an aspect ratio of 19.5:9.

The phone is powered by an octa-core Qualcomm Snapdragon 855 Plus processor and paired with 8GB of RAM and 128 GB of native storage. The Vivo iQOO Pro supports face unlock feature as well.

Huawei has just expanded its upper mid-range flagship with two solid smartphones. The phones Honor V30 and V30 Pro both are built with a dual selfie camera, punch-hole design, and a side-mounted fingerprint sensor for identity verification. In addition, the series packs -mode 5G connectivity and 40W fast charging technology as well.

Along with these awesome features, the phone packs a couple of aesthetic and stunning high definition wallpapers that will impress you for sure.

If you can’t wait to download Oppo A11Xstock wallpapers, click the following cloud link and get the .zip file unzipped on your device. These wallpapers are stored here in full HD+ quality with a 1080 x 2400 pixel resolution 20:9 aspect ratio.

The images shown below are for display purpose only and can’t be used as wallpapers. If you will do that, the image quality will be deteriorated and blurred.

Huawei, the ace smartphone maker has just launched its latest flagship smartphone Nova 5Z. The phone is the next device in its Nova series. The phone features an IPS LCD display with a pinhole full view aspect ratio display.

You will really appreciate this trendy phone with a new look. The phone is powered by the HiSilicon Kirin 810 which 7nm chipset and comes packed with some stunning and pretty Huawei Nova 5Z stock wallpapers that you can download. The device  Huawei Nova 5Z sports a 6.26-inch display with screen resolution of 1080 x 2340 pixels. The phone Huawei Nova 5Z is powered by HiSilicon Kirin 810 7NM processor coupled with 6GB of RAM and 64/128GB of internal storage. The phone comes packed with a nano memory hybrid card slot to expand the native memory storage up to 256 GB.

On camera front, the phone flaunts a 48MP f/1.8 (Wide) +8MP f/2.4 (ultrawide) +2Mp f/2.4 depth-sensing + 2MP dedicated macro camera and a primary camera on its back. Along with the quad camera setup on the phone, the phone Nova 5Z has a front camera of 32MP with f/2.0 aperture available.

The phone runs Android 9.0 Pie with the EMUI 9.1 skin. It houses a 4000mAh non-removable battery with 20W fast charging support.

Sony Xperia 8 comes with four eye candy, vivid and colorful Sony Xperia 8 Stock wallpapers. They can fit to the device display seamlessly. The wallpapers are available in 1080 x 2160 pixels resolution along with the aspect ratio of 19:9. We will get you soon some pretty cool wallpaper in the list. The article explains how to Download Sony Xperia 8 Stock Wallpapers quickly. 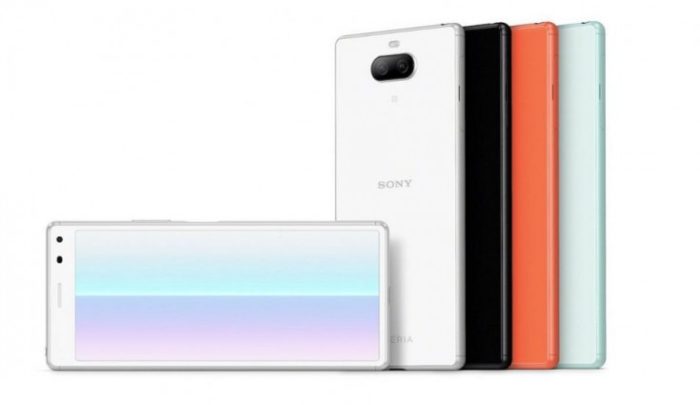 Sony Xperia 8, the latest smartphone by tech conglomerate Sony was launched on 7th October 2019.  The USP of the device is its Full HD plus display with a full view aspect ratio display. The phone looks stunning and you will fall in love with it at first site.

Before finding out the details how to download beautiful Sony Xperia 8 Wallpapers, let’s have a look on phone’s features.

Sony Xperia 8 comes loaded with a 6.00-inch display and is powered by an octa-core Qualcomm Snapdragon 630 processor. The phone has under the hood 4GB of RAM and runs Android 9 Pie operating system. The phone has 64GB of inbuilt storage that can be expanded via microSD card up to 512GB. The phone has on board a 2760mAh battery.

Realme XT is another power packed smartphone from Oppo sub brand. The phone is a heavily featured handset in a truly affordable price. The phone is a perfect choice if you’re looking for a spec heavy phone in a price range of INR 16000 to INR 19000. Along with its stunning features, the phone packs a few vibrant and high quality Realme XT stock wallpapers. Read on to find the link to download Realme XT stock wallpapers.

You can get 3 Realme XT stock wallpapers with the phone in blue shade. These are packed in 1080 pixels x 2340 pixels resolution. They have the aspect ratio of 19.5:9. These wallpapers are vivid and vibrant and look pretty cool on your device.

The images of the wallpapers below are for representational purpose only. These are compressed JPEG images unlike the originals that come in PNG format. Don’t use them as actual wallpapers. Instead click our Google drive link above.

Launched on September 13th, the Realme XT packs a 6.40-inch touchscreen display with a resolution of 1080×2340 pixels and an aspect ratio of 19.5:9. The phone is powered by a 2.3GHz octa-core Qualcomm Snapdragon 712 processor paired with 4GB of RAM. The Realme XT is a dual-SIM (GSM and GSM) smartphone that accepts Nano-SIM and Nano-SIM cards.

The phone runs ColorOS 6 based on Android 9 Pie and is powered by a 4,000mAh non-removable battery with VOOC fast charging support. The phone has 64GB of inbuilt storage under the hood that can be expanded via microSD card (up to 256GB).

On photography front, the phone Realme XT packs a four camera setup on its back. The setup includes:

The camera setup has an autofocus feature as well. For selfies and high quality video calling, the phone sports a 16-megapixel camera on the front.

Realme 5 Pro is one of those phones that comprises of four-cam system. It’s designed to let users to click great picture in high resolution.  This reminds us of Samsung’s Galaxy A9 (2018). 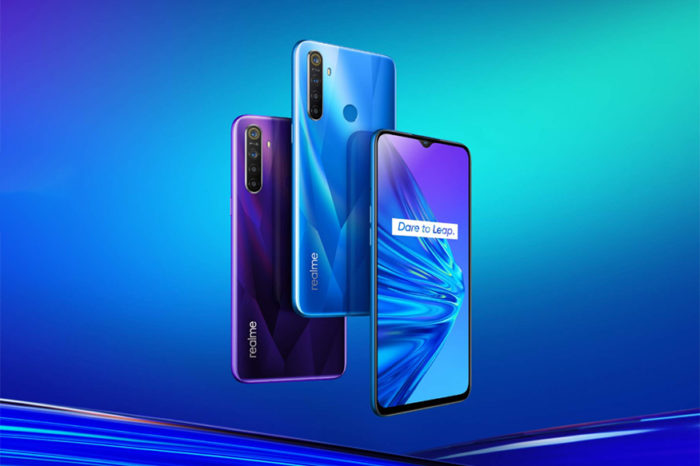 The Realme 5 Pro features a 6.3-inch Full HD+ IPS panel with water-drop notched for awesome visuals on go. Phone’s display has the aspect ratio 19.5:9 and resolution of 1080 x 2340 pixels.

The Realme 5 Pro is powered by a Qualcomm Snapdragon 712 SoC.  The phone comes in 4GB, 6GB or 8GB of RAM variants and 64GB and 128GB native storage. You can insert a MicroSD card slot to expand the storage further. A USB-C port is also available in the Realme 5 Pro.

The phone also features a fingerprint reader located at the rear of the Realme 5 Pro. The fingerprint scanner helps in enhancing security of apps and allows you to lock/ unlock the phone for biometric authentication purposes.

Don’t sway away by the fancy naming. AI Freezer is a feature similar to Android’s power saver. The feature automatically shuts down all unused apps over time and saves your phone battery from early draining.

The Realme 5 pro has a powerful 4035 mAh battery on board to power up the device. The battery is built with fast battery charging and Oppo’s VOOC 3.0 charging tech. The company claims that phone’s battery is charged half-full from flat in 30 minutes.

For connectivity, the phone sports a dual-band Wi-Fi a/b/g/n/ac, Bluetooth 5.0 LE along with GPS for navigation and location services.  An audio jack is also given in the Realme 5 Pro. The Realme 5 Pro runs on ColorOS 6 based Android 9.0 Pie.

The Realme 5 Pro will be available with a price tag that starts with INR 13,999  in Crystal Blue and Crystal Green color options.

The Realme 5 Pro comes packed with 4 high-res, vibrant and saturated wallpapers in resolution and aspect ratio of 1080 x 2340 pixels and 19.5:9 respectively.

These wallpapers are available in resolution and aspect ratio of 1080 x 2520 pixels and 19.5:9 respectively.  Before diving into the details how to download Motorola P50 HD wallpapers, let’s have a look on some of its key features and specs.

Chinese handset maker Huawei launched Honor 20i mid range smartphone for Indian markets. This mid range device is powered by the Kirin 710 SoC and comprises a triple camera system on board.

The Honor 20i comes with a fresh set of Honor 20i Stock wallpapers in HD. These HD wallpapers are bundled in 2160 x 2310 pixel resolution.

But Before diving further into the way to download Honor 20i wallpapers, let’s look into phone’s specs and features.

Honor 20i: Configuration and Features The handset is powered by Kirin 710 SoC paired with 4GB of RAM.  The phone has 128GB of internal storage that can be expanded up to 1 TB via a dedicated Micro SD card slot. The phone has a fingerprint scanner placed in rear.

The Honor 20i has onboard three cameras at the rear. The setup comprises a primary 24MP shooter with f/1.8 aperture.

The setup also includes an 8MP ultra-wide-angle camera and a 2MP depth-sensing camera. For selfies, the phone flaunts a single 32MP selfie shooter.

Phone’s rear and front cameras are capable to record videos at a resolution of up to Full HD @ 60 fps and again Full HD but @ 30fps respectively.

Honor 20i: Battery and Connectivity

To power up the phone, a 3400 mAh battery is given with the Honor 20i. In addition, it’s backed by Micro-USB port to charge the device at 10W.

The phone also has GPS for navigation and location-based services and a 3.5mm headphone jack to plug in headsets and earphones.

And the last but not the least, the Honor 20i comes pre-installed with Android 9.0 Pie based EMUI 9.0 operating system.

The Honor 20i can be purchased via online retailer Flipkart at an affordable price tag INR 14,999. The handset is available there in Phantom Blue and Midnight Black color variants. All the phones in the CC9 series including CC9, CC9e, and CC9 Meitu are selfie centric devices with massive battery life. Alongside all the noteworthy features, you can access 3 Xiaomi CC9 stock wallpapers as well that you can download now.

Redmi 7A is Xiaomi’s next budget phone loaded with amazing mid-range phone features. The phone is currently available in China only.

The handset could reach India in month of July as per the rumors. Even before launching in India, the phone is in limelight for its high quality full HD stock wallpapers.

Before giving you instructions how to Download Redmi 7A Full HD Stock Wallpapers, let’s have a look on phone features. Android Q, the finest operating system by Google is here. Besides other features and utilities

How to Generate Leads For Your Online Business in 2020?

30Shares
We use cookies to ensure that we give you the best experience on our website. If you continue to use this site we will assume that you are happy with it.Ok