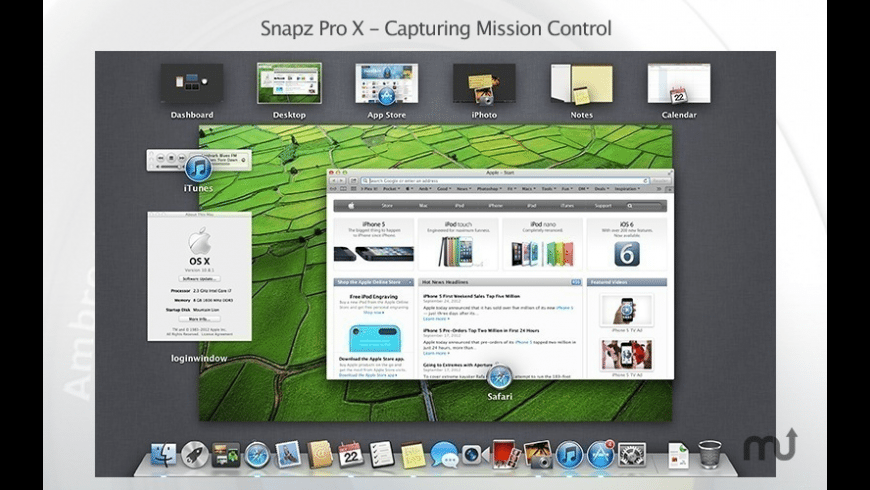 Snipping Tool captures a screenshot of your screen, which is sometimes the quickest way to make a copy of something. It can be mainly used to save and share news stories, movie reviews, and recipes. From the Snipping Tools window, you can capture all or part of your PC screen, add notes, save the snip, or email it.

For a valid reason, Microsoft’s Snipping Tool is one of its most well-known applications. It’s never been easier to take screenshots. However, what if you want to use a Snipping Tool on a Mac?

Continue reading will help you to learn how to easily take screenshots similar to Snipping Tool, as well as 10 different applications that can be used as Snipping Tool for Mac to assist you.

In Grab, you can take screenshots even more quickly and easily by using keyboard shortcuts. It can be found in the Utility folder.

It is a great third-party snipping tool for mac. It has annotation tools after capturing your screen and supporting the commonly selected window, Part of the Screen, and Full-Screen capture modes.

You can select the image file format and also send the Capture to another application where it can be used, such as Adobe Photoshop. Along with free cloud storage, you can Capture a Video and use your Mac’s Front Facing camera with the Screen Video feature in the Monosnap app. You can purchase this Pro Version, which includes additional features.

CloudApp is a Mac Snipping Tool replacement that can capture images, video, webcam, and GIFs up to 300 percent faster. CloudApp is easier to use because it appears on the toolbar as soon as you download it, saving you up to a minute and a half on Screenshots.

The Capture can have annotations added to it. You can easily upload large files of various types, share the link to your video, and more. Another feature that stands out in this app is finding the related image in an organized manner by finding using text, objects, or attributes, such as a specific that you remember being prominent in the image.

If you’re looking for a free and powerful screenshot capture tool with all of the essential features for capturing and editing screenshots, CloudApp could be the ideal solution.

SnapNDrag is a very useful Screenshot application if you are willing to spend a short amount more than you normally would to download snipping tools for mac. The full version cost can be affordable, with additional fees for extra features.

However, if you do purchase it, you will receive amazing features such as its convenient Library, which is where your Screenshots will be saved. You can send the Capture to Mail or Messages, annotate your screenshot, and choose from various output formats (PNG, JPEG or TFF).

Border and scaling options, keyboard shortcuts, batch renaming, and other features are included in the Pro version.

Lightshot is not as flashy as some of the previously mentioned screenshot apps, and it may lack some features, but it is unquestionably useful, convenient, and deserving of consideration as a Snipping Tool alternative for your Mac.

It’s quick, you can annotate easily, and you can customize your Captures to your liking. Once you’ve captured the screen, the Screen Editor is quite good. The screenshot can then be saved, copied to the clipboard, or upload to Lightshot’s image sharing website. When you select the cloud sharing option, you will instantly receive a public link for the image.

Snagit is one of the powerful Screen Grabbers that supports almost all of the features mentioned above, including advanced image editing and screen recording. It is the most powerful application on this list.

One of this software is its visually appealing interface, which is important to many users. Businesspeople, content creators, and others use the software. It is convenient to use it to maximize your reach for whatever purpose you capture your screen.

This is a free snipping tool for mac that includes more annotation and other features than you can imagine, allowing you to customize almost anything.

Jing is another useful Snipping application for your Mac. It’s a slightly less powerful Snagit, but features like History, instant saving to video, and being discrete make it a good piece of Techsmith software to get for your Mac.

You can also share your Capture after taking it with the Jing app’s Screenshot feature. But it is prone to crashes and is regarded as ineffective when it comes to resizing your captured images.

Snapz Pro X is one of the best and oldest Screenshot applications used on Mac platforms and has been used by both old and new Mac users. It is very powerful, and creating capture videos is especially easy in this application; thus, it is widely used to create content that requires screen captures, such as tutorials.

The screenshot you take can be edited and annotated with a variety of powerful customization options.

J shot is a simple screen capture programme that has a wide range of applications. It takes and processes screenshots faster than many of its competitors. It has annotation features as well as the ability to easily share your Capture.

It does not, however, support custom shapes or images. The Mac version of this software has some features so that it will suffice for your basic needs. Just don’t expect anything too fancy from it.

Skitch’s screen capturing interface is otherwise very good, and creating annotations on your captured image is extremely smooth. Skitch is a free snippet for the Mac app available on the Mac App Store that will easily allow you to capture, edit, and share screenshots.

Skitch keeps things simple with an interface that loads quickly and is made up of large, easily identifiable icons for each of its tools. Skitch’s mark-up feature includes seven tools.

Now you can get some idea about how to use the snipping tool. You have successfully chosen the best Snipping Tool for Mac based on your preferences and needs, and you have clearly learned how to take a Screenshot on Mac with any of these apps.