Samsung unveiled its foldable phone first time at its SDC 2018 developer conference in San Francisco. At that time the device looked like a rather thick smartphone that folds. 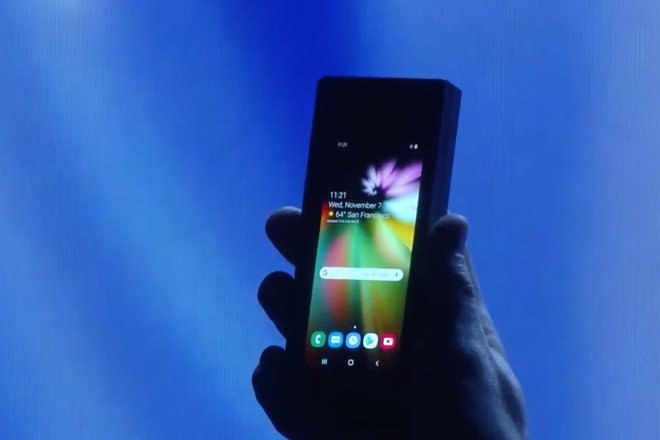 It was a prototype that the company is now showing up Samsung First Foldable Phone officially as “Infinity Flex” flexible display technology.

It’s now official that Samsung is almost ready to unearth its foldable device. It’s already in domain that company has been working on this device and has been teasing it for over a fortnight. (contd.: Samsung First Foldable Phone)

Now, the world is getting the first glimpse of world’s first foldable phone. The phone may have a tablet-sized screen and can indeed be folded up, as it was showed off during the show. The brick shaped device could flaunt a 7.3 inch tablet display and a cover display that acts as a phone.

Samsung claims that the phone can run up to three apps at the same time as it comes packed with a “multi active window” feature.

Samsung will start mass production of the infinity flex display phone over a few months. However, the company hasn’t uttered any words on when the phone will ready for the market. Meanwhile, Google affirmed its support for for foldable phones. (contd.: Samsung First Foldable Phone)

We, as of now have no clue how much the phone will cost and where it’ll launch first. Stay tuned as we will keep updating you on the matter.

Latest posts by Team BR (see all)
DO NOT MISS:   Lave To Launch Its First Android One Smartphone On July 14.

2Shares
wpDiscuz
We use cookies to ensure that we give you the best experience on our website. If you continue to use this site we will assume that you are happy with it.Ok