Facebook owned WhatsApp has updated its iOS version with a slew of new features. With WhatsApp update version 2.18.22, the messenger brings a long anticipated voice to video call toggle feature that lets users switch between voice calls and video calls with a single tap. 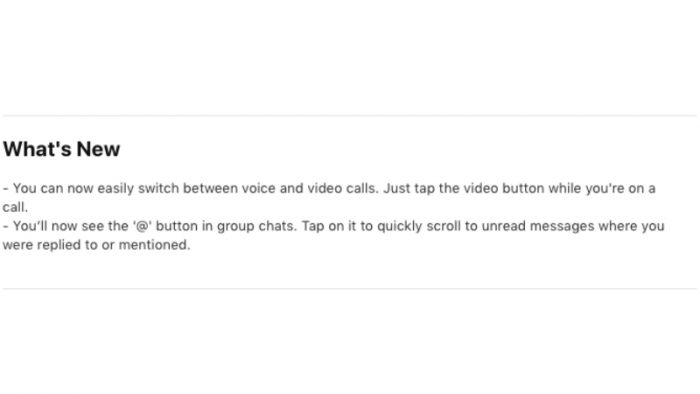 Another feature that arrives in the update is the ‘@’ mentions button in group chats. The @ button will enable users to traverse through unread messages in which you were mentioned. WhatsApp for Android already rolled out the voice to video toggle feature last month.

The WhatsApp v2.18.22 update has been listed on iPhone App Store along with a changelong status that reads:

“You can now easily switch between voice and video calls. Just tap the video button while you’re on a call. You’ll now see the ‘@’ button in group chats. Tap on it to quickly scroll to unread messages where you were replied to or mentioned.”

The features above are being rolled out slowly as users weren’t able to see them despite being the latest version of the app. Earlier, a users were required to disconnect a voice call if they wanted to place a video call with the same contact.

DO NOT MISS:   WhatsApp Beta For Android Gets New iOS 10 Style Emojis

Now, with the update in place, a new button has been given that users can tap to switch from voice to video by tapping it. When tapped, a request is sent to the recipient. If recipient accepts the request voice call gets converted into a video call.