Tech magnet Huawei is all set to unveil its next-gen Mate series flagship smartphones including the Mate 30 and Mate 30 Pro at an event in Germany on September 19th. 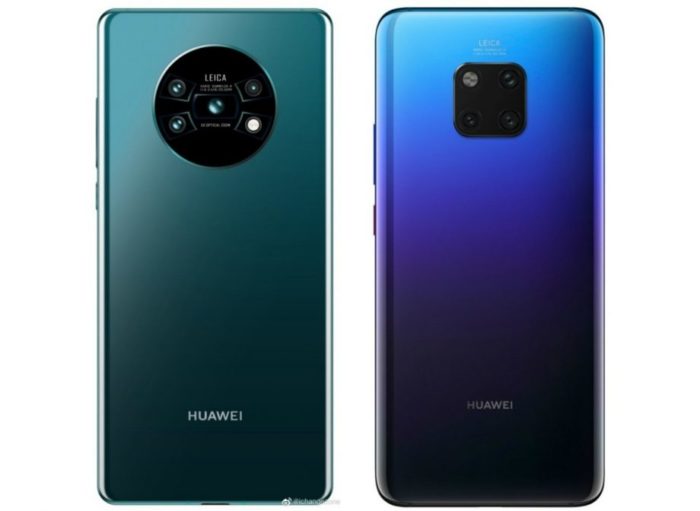 These phones will be packed with noteworthy upgrades over the Mate 20 and Mate 20 Pro. Ahead of the mega launch, several leaks have been surfaced suggesting possible specifications of the Mate 30 and Mate 30 Pro.

Leaks suggest that the Huawei Mate 30 Pro may sport a large waterfall notch above the screen alongside phone’s selfies snapper and additional sensors for secure 3D face mapping and unlocking.

The phone, as leaks suggest will pack a four rear camera setup placed inside a circular module.  The phone could also have a large LED flash on the left-side.

Similarly, if leaks are to be believed, the Huawei Mate 30 could come with a small cutout above the screen housing two selfie snappers.  The phone may probably ditch 3D face unlock mechanism.  In addition, the Mate 30 is expected to sport a four cameras set up at its rear placed in a square module.

Both the handsets the Mate 30 and Mate 30 Pro is said to have under-display fingerprint sensors. There are strong rumors as well that are suggesting that the phones could come with optional modular accessories.

On the contrary, the Mate 30 Pro is excepted to feature a mammoth  6.7-inch OLED display with a resolution of QHD+ and screen refresh rate of 90Hz. As per leaked images, Huawei Mate 30 is expected to come with a flat screen, while Huawei Mate 30 pro sports a curved display on both sides.

If rendered images and leaks are to be believed, the Huawei Mate 30 and Mate 30 Pro duo will be powered by HiSilicon Kirin 990 flagship chipset that supports 5G connectivity. The disappointing aspect is that we don’t have any idea about the storage options available with the phones.

Now moving at the camera front, both the phones are expected to have a quad camera setup on rear. The Mate 30 Pro’s quad-camera setup will probably comprise 40MP, 40MP, 8MP, and ToF cameras.

Its main 40MP camera may embed an aperture of f/1.4-f/1.5 and RYYB pixel layout.  Phone’s secondary 40MP camera could be an ultra-wide-angle lens. The third 8MP sensor is backed by 5X zoom capabilities.

Camera configurations of Huawei Mate 30 are yet be announced and we have no idea what they could be.

The upcoming Huawei Mate 30 series handsets are expected to run on Android 9 Pie-based EMUI 9.1 out of the box. The Mate 30 and Mate 30 Pro are expected have 4,200mAh and 4,500mAh batteries respectively with fast charging at 25W in wireless mode and 55W in wired mode.

We have no clue about the pricing and availability of the handsets in respective phone markets. We will keep you updated.

18Shares
wpDiscuz
0
0
Would love your thoughts, please comment.x
()
x
| Reply
We use cookies to ensure that we give you the best experience on our website. If you continue to use this site we will assume that you are happy with it.Ok