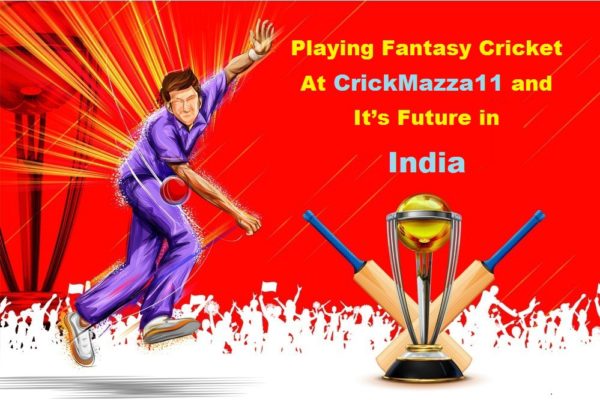 Cricket is a wonderful team game. You can now play cricket fantasy games on your mobile phone with the help of the pixels. The cricket fantasy leagues online are almost similar to the real-life games in planning and strategy making. In this article, we will talk about the top 10 fantasy Cricket apps.

They can play fantasy cricket and win cash daily, which is a really attractive offer.  The dream11 fantasy cricket game is cool enough to arrange the contests at different times which lets the user participate in them and win real cash money. At other times, this game is sheerly for the purpose of entertainment.

Dream 11 has over four million users which is a huge number of users for fantasy cricket apps. It was founded in the year 2008 and received the innovation award in 2019 by the Fast Company.

Crickmazza11 is a cricket world cup fantasy app that can help the user to build up the dream team in the game of cricket and earn money by playing up against other teams in the tournaments. The game is really cool and helps the user to choose whichever player they want and also they also can choose the match they wish to play.

Users can join up fantasy cricket league whichever tournament they wish to and the winning trophy at the end of the match usually results as cash money. This is a fantastic game which helps the player to get adequate knowledge about cricket and win money at the same time

And as our grand option, we have the choice of My Fab11 which is yet another fantasy Cricket app that will let you choose the players on an online basis and also lets you compete, with those who are playing at the same level as you.

You can choose to play the fantasy cricket world cup with the same team over and over again and the game will lead you to cross the different levels in the game and this will let you win the cash money at the top of the ladder.

This is another cool app to play a cricket fantasy game which was built up in the year 2018 by Navkiran Singh and other of his associates. This company has aimed to make fantasy teams that are perfect for the making and playing of virtual team members.

The game of BalleBaazi fantasy cricket league is good for real cricket fanatics. The game format allows for the formats during the game which arrange for contests. The players need to pay a certain amount of fees to enter these contests. The winning of these fantasy cricket apps contests leads to winning cash and the company is bound to pay them.

My Team 11 is a good Cricket fantasy league online app that lets the user make up teams on their own and lets the user win cash on the basis of the performance of the user. There is complete freedom in the choice of players and the users have to sign in to the app to make sure that they receive the best rewards associated with the game.

The players enjoy several benefits that are exclusive to this game. The MyTeam 11 fantasy cricket app is a perfect choice for a user who is opting for both foreign and indigenous games.

Fantasy Cricket apps provide the options of many apps to choose from. Power 11 is among one of them. The power 11 app is a perfect app for the choice of a person who is well informed about cricket management and the basic strategies which are used to create a good game structure.

The power 11 is my cricket app that will let you choose the players whom you want for your team. You can play the cricket app game on the online platform and at the same time lets you make decisions about how you should tackle the opponent. This is a wonderful magic sequence of the pixels which is going to give you the real-life feeling of the actual cricket game when you play it.

My 11 circle is a good app for you to choose as it will make you opt to play fantasy cricket and win cash daily. The live cricket app game is almost like the real game which decides on the cricket knowledge of the person playing it.

The ability to make decisions that are very important in any game plays a crucial role when you play this game. The fantasy cricket league user has to decide on the team making abilities and also build up the winning strategies of the team as well. It may be any kind of device which will let the person play this game.

The game of GoSuper 11 is a perfect game that is used by most of the users who are interested in fantasy cricket games. The game can help you to choose the best players whom you want for the team and you can choose this team for any upcoming match. This is going to make sure that your team has the best players of all time and this will also let you make the strategies that you think are perfect for the team.

The player can play fantasy cricket online and the best part about this game is that you can earn money with the help of this game and you can also earn by the involvement of those friends who have joined this game with your referral code.

PlayerzPot is yet another fantasy cricket league option that is perfect for you to choose if you are a person with enough craze for cricket and has enough want for money. This game will allow you to earn money in a really easy manner which will ensure that you have the best fantasy gaming app for your phone.

The PlayerzPot is a game that has the features of referring for an unlimited amount of time which will let you earn money every time someone uses your referral code to enter the game.

The game is the perfect choice for a fantastic cricket match fanatic who has enough knowledge which will lead them to choose the best people for their teams and the app can be linked with your Paytm wallet which will let the direct flow of cash into your account.

HalaPlay is the best option you can opt for if you are going for the fantasy Cricket apps. This game has over eighty-five lakh followers who are regularly following up this app for updates related to the cricket matches held all over the world.

This fantasy cricket match app is also very good for matches like one-day matches or T20s and the game is good for the people who are well informed about the game.

The app has a good rating all in the Google Play Store. It has a rating of 4.7 stars out of 5 stars and the cash prize won for the game is quite high in this case. The game has a huge reward for those who are fond of playing fantasy Cricket online.

Thus, these are the perfect fantasy cricket apps you must prefer if you want to win a cash reward in your passion for gaming and cricket. That’s all with the list of 10 fantasy cricket app.  If you think that the list is missing a few popular apps, do tell us in comment box. Thank you for stopping by.