Xiaomi’s upcoming flagship device Xiaomi Mi 6 with 12MP Rear Dual Camera may feature a 5.1 inch display carrying a 1080×1920 (FHD) resolution. Though, the device was slated for a mega launch tomorrow, some of its specifications got leaked at benchmarking website GFXBench. 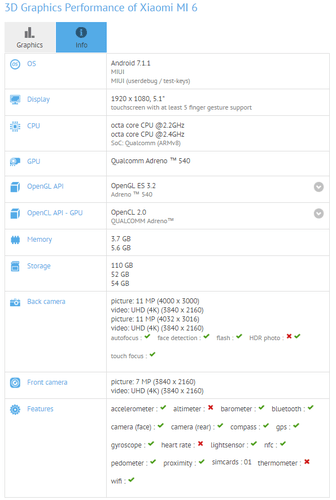 The leak hints that the device will come packed with Snapdragon 835 chipset with an octa-core CPU, and the Adreno 640 GPU. Moreover, the phone will be available in two variants- one with 4GB RAM/64GB storage and other one with 6GB RAM/128GB of native storage.

Previous leaks about the phone had hinted the presence of a19MP shooter on back and a 12MP dual-camera setup on the rear. For selfies, the phone has an 8MP camera on the front. The benchmark further suggests that Xiaomi Mi 6 with 12MP Rear Dual Camera will be powered by Android 7.1.1 operating system.

DO NOT MISS:   Is This Xiaomi’s New Device With Bendable Screen?

The phone may have a 3200mAh battery and a fingerprint scanner as well. The listing and the leaked images on GFXBench indicates the dual-camera setup on back.  Just look at the leaked pictures and you can clearly see two cutouts for the dual cameras on the Mi 6’s rear cover.

Xiaomi recently had launched a teaser hinting Mi 6 with two rear snappers as well. Rumor mills suggest that the Xiaomi Mi 6 with 12MP Rear Dual Camera will have a price tag of $290 USD.

Follow Us
Latest posts by Sumant Singh (see all)
DO NOT MISS:   Xiaomi Redmi Note To Hit India On December 2. Redmi Note Technical Specifications And Price