Cross-platform messaging app WhatsApp has rolled out an update for iOs users. After this update, users can now send and receive GIFs as well. With the update in place, WhatsApp for iOS users can now search Giphy‘s GIF library to find GIFs that they can share with others. In addition, users can edit GIFs with text, stickers and drawings before sending them.

Another important addition that WhatsApp For iOs update has brought is an ability to trim video clips to the desired lengths. WhatsApp users for iOs can now turn videos that are 6 seconds in length into GIFs, which they can send to the others.  To convert video into GIF, a user selects a video from their camera roll within the app’s Attach menu and taps the GIF toggle to send it as a GIF.

DO NOT MISS:   WhatsApp Payment Feature Arrives on iOS and Android Beta 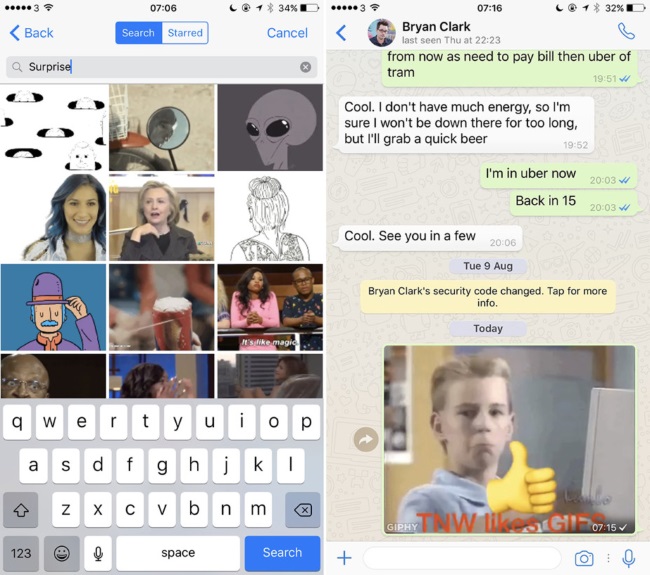 Besides sending videos as GIFs, the WhatsApp For iOs update will also allow users  to send Live Photos as GIFs as well. To do so, users can select the content from library or camera rolls and can 3D Touch any Live Photo and tap “Select as GIF” to send the Live Photo as an animated GIF.

The features are now being rolled for WhatsApp For iOs users. The latest version of WhatsApp is now available to download for free on the iTunes App Store.

Follow Us
Latest posts by Sumant Singh (see all)
DO NOT MISS:   WhatsApp Now Adds Text Formatting Feature For The Users