Twitter, the microblogging legend has announced its new Twitter app for Mac. This latest version of the app has been built on macOS Catalina. The app is now available in the app store for download. 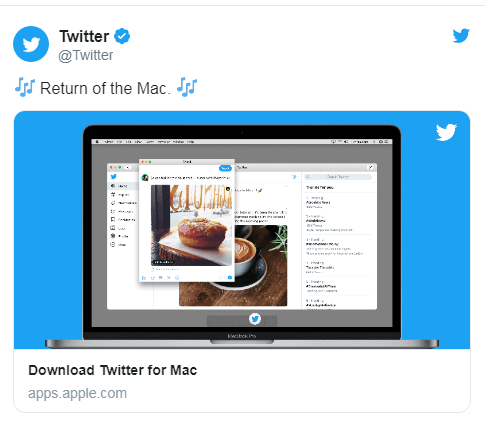 The app can now be downloaded from the app store. To recall, Twitter unveiled its redesigned and completely revamped Mac app back in June this year.

The app is packed with improved tools, features and useful options based on Catalina. In Feb 2018, Twitter stopped support for its existing Mac app. The sudden step by Twitter left Twitter users on Mac stunned and annoyed.

Thankfully, your Twitter app for Mac is back now. This redesigned app will have following additions over the dropped app.

As the new Mac app for Twitter, users needn’t to pause any running application while you browse or composing a tweet. Using the app, you can now browse through multiple photos all at once, and compose Tweets in simultaneously opened windows.

The Twitter App for Mac comes loaded with so many of your favorite features that you almost missed for a while on Mac OS. With the new app in place, you can use dark mode and multi-account login again on your Mac device.

Adding images, photos and other visual elements will be lot easier on this new Twitter app for Mac. If you want to include a funny photo or a link to a story, you drag and drop them directly into your Tweet composers. The feature supports 4k images in JPEG, PNG, TIFF, HEIC and WebP format.

The downside of the app is that you’re bound to run Catalina OS to run the app since it’s built around this. This means, if you are eager to run Twitter, you have to face this. Stay tuned, we will keep you updated on this.

Follow Us
Latest posts by Sumant Singh (see all)
DO NOT MISS:   Twitter Unveils Message Filter to Block Anonymous DMs