Microblogging legend Twitter is reportedly working on a news timeline on the top of the user feeds. The timeline, as name suggests will highlight the breaking news events.

The feature is under testing with select group of users on Android and iOS. Twitter’s own algorithm would automatically curate and list the news items in the feed. 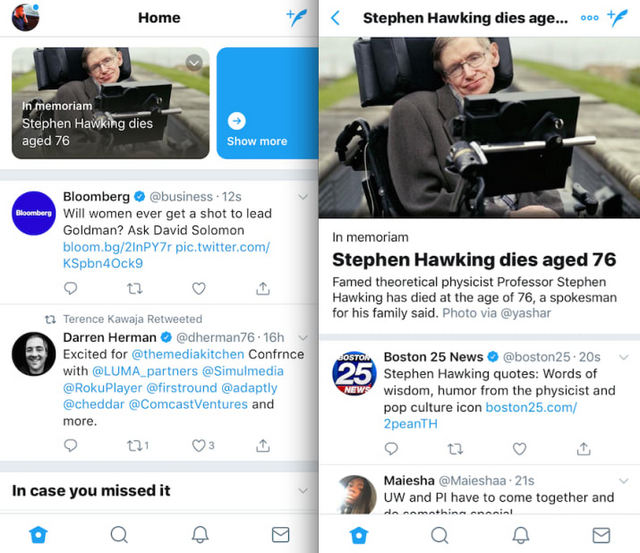 A report published on BuzzFeed revealed that Twitter tested a highlighted curated timeline on 14 March. The timeline contained and displayed the news items and events such as the congressional special election in Pennsylvania, the death of Stephen Hawking, and a lawsuit filed by the family of murdered DNC staffer Seth Rich against Fox News.

Twitter officially confirmed the news.  Twitter product VP Keith Coleman  said in a statement that the company is working on ways to make it easier for everyone to find relevant news, surrounding conversation to keep them informed about what matters to them.

DO NOT MISS:   When #WomenBoycottTwitter Hashtag Put Twitter on Back foot

Keith further added that the feature would be coming with multiple timelines for the same news, one with the latest tweets whereas the other with recaps tweets. The feature that’s yet to go live for all is an extension of the “Happening Now” feature that highlighted the users to check current sports tweets.

The feature will display highlights during big breaking news events and will be followed by a timeline with algorithmically curated tweets related to the event.

Follow Us
Latest posts by Sumant Singh (see all)
DO NOT MISS:   Twitter Introduces Promoted Stickers For Brands