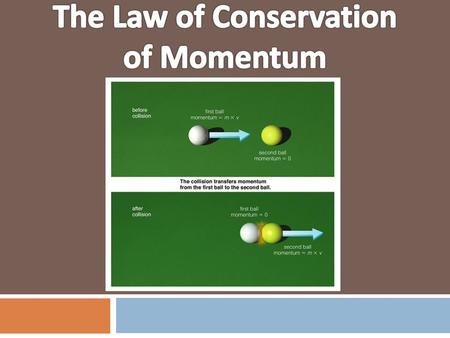 Conservation, in terms of physics, can be defined as something that does not change or, specifically, a variable in any condition will be its conservation.

We need to know what momentum is before we start learning about the conservation of momentum. Momentum is defined as the resultant of the product of velocity and mass. It is a vector quantity, i.e. it has both direction and magnitude. If we take m for mass and v as velocity, the momentum of an object at that point will be P = m. v

The S.I unit of momentum is a kilogram meter per second (kg.m/sec).

It is one of the fundamental laws in physics.

The law states that “for two or more objects in an isolated system acting upon each other, their total momentum remains fixed unless an external force is applied”.

Explanations: if one or more bodies are in an isolated framework or a framework free from any external force that acts on each other, the total momentum of the system of bodies stays the same unless an external force is applied to it.

The total momentum can be calculated with the vector sum of individual momenta of the framework. The total momentum stays along any direction and always remains constant. In any physical process, momentum always stays in equilibrium.

Conservation of Momentum – One Dimension

Conservation of momentum can be easily explained with the help of a one-dimensional collision of bodies. Let us take two objects of the given masses, m1 and m2, moving along a straight line with their velocities u1 and u2, respectively.

The two objects collide with each other, and after the collision, they have a velocity of v1 and v2 and move along the same straight line or the same direction.

The total momentum remains constant if no other force acts on it, therefore,

Deduction of Conservation of Momentum

After the collision of the two objects, if no external force is present, both the objects tend to apply impulse on each other for a short period during the point of contact.

During the collision of the two objects, the masses of the two objects m1 and m2 with velocity  u1 and u2  before collision and v1 and v2 after collision, the impulse force on the first object applied by the second object is F21 and the impulse force on the second object applied by the first object is F12. with the application of Newton’s Thirds Law,

If we take t as the time period of contact during the collision, the impulse force F21 will change

This relation shows that the momentum remains constant even during the collision of two objects.

Few Examples of Conservation of  Momentum

Here are some of the examples of conservation of momentum of objects in our daily lives. It will help you to understand it in a better way.

The recoil of a gun

If you shoot a bullet from a gun, at first, both the bullet and the gun are still, i.e., the momentum is zero before firing the gun. When the gun is fired, the bullet gains a forward momentum and gets discharged from the gun.

As you are blowing into a balloon, the small particles of gases moving inside the balloon quickly collide with one another while crashing with the surface of the balloon. Although the particles are smaller in size and pick up the momentum while colliding, the system’s total momentum remains unchanged and stays the same as before.

As the gas is ejected from the rocket, the rocket then acquires a recoil velocity and acceleration which acts in the opposite direction. This is due to the conservation of momentum.

Conservation of momentum is always kept in mind during any scientific experiment. So, it is one of the important parts of physics that will help us understand the law of nature in a better way.