If you’ve found BlackBerry KEYone the best blackberry device in the town, another massive version of KEYone is almost here to surprise you. GSMArena reports the appearance of a device, allegedly the successor of BlackBerry KEYone, with model number QUALCOMM BBF100-1 on Benchmarking site GeekBench. 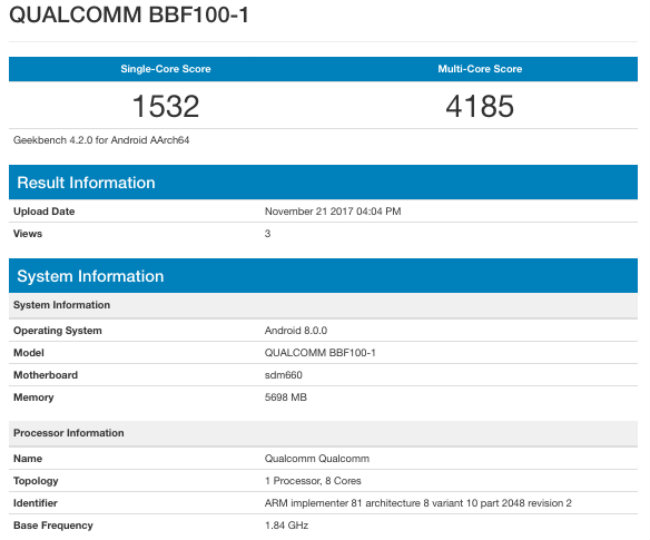 If slew of details emerged from the listing is to be believed, the alleged BlackBerry KEYOne successor will be a Qualcomm Snapdragon 660 SoC powered device paired with 6GB of RAM and runs on Android Oreo. The handset scored 1532 in single-core and 4185 in multi-core score test.

To recall, BlackBerry makers launched the BlackBerry KEYone back in April 2017 with a 4.5-inch Full HD IPS display, 1080 x 1620p resolution and with Corning Gorilla Glass protection on board.

The BlackBerry KEYOne was powered by a 2 GHz Octa-core Qualcomm Snapdragon 625 chipset coupled with 4GB of RAM. The phone has 64GB of internal storage on board, which can be further expanded up to 2TB via a microSD card.

The BlackBerry KEYOne was launched with a 12MP rear camera and an 8MP camera for selfies. The phone packed a 3505mAh battery when launched and run Android 7.1 Nougat. The phone happens to be a dual SIM smartphone with core connectivity options such as GPS, hotspot, NFC, WiFi and Bluetooth.