LinkedIn appears to be on spree to turn advertisements on its social networking platform an easy going thing. Having this in mind, the company has completely revamped its campaign creation process. 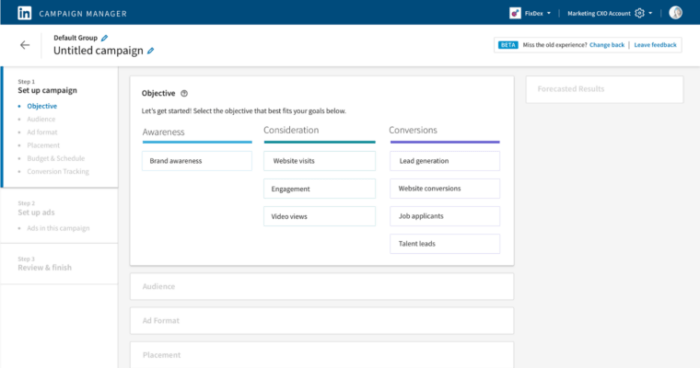 The company has reportedly rolled out a public beta release of ‘Objective-Based Advertising in Campaign Manager’ to include future changes into its advertising platform.

“This is a complete overhaul of Campaign Manager designed to make it easier to create campaigns and measure their impact. The newly designed campaign creation experience will lay the groundwork for objective-based optimization and pricing to come mid-2019.”

For making navigation easy, the multiple screens have been combined into a single, easy-to-navigate flow with fewer pages.

DO NOT MISS:   Twitter Applying To Trademark Subtweet, Purpose Better Known To The Company

The process brings in a new forecasting panel to let advertisers see estimates of expected results based on campaign inputs and comparisons to similar campaigns and advertisers.

LinkedIn has revamped LinkedIn’s targeting with more emphasis on its user-friendliness.

With Live Ad Previews, advertisers can see what an ad looks like as it’s being built.

Furthermore, along with the ability of analysing key results obtained, advertisers can also choose from seven additional views to surface metrics that they most care about.

LinkedIn announces that the public beta of this new advertising experience will be start rolling out for the advertisers starting November 14.

For more information you can watch the full announcement video below:

DO NOT MISS:   Facebook Is Testing DeepFace Feature For Tagging Pictures Automatically

4Shares
wpDiscuz
We use cookies to ensure that we give you the best experience on our website. If you continue to use this site we will assume that you are happy with it.Ok