Google is All Set to Secure Third-Party Logins

Google’s zeal to secure its services from intrusions and hackings is well known, especially user loggings. Now the tech giant has introduced a new sign-in feature to beef up account logging security even further.

Google offered the feature in detail in an official blog post. The blog read that the Google is bringing a new sign-in feature to all Google account holders. The feature will ask users to verify if they are logging to the authentic accounts. It’s to keep Google accounts safe from fishing and hacking. Actually, the idea behind the feature is to prevent attackers from signing users into accounts they don’t control.

This new screen is intended to prevent would-be attackers from tricking a user (e.g. via a phishing campaign) into clicking a link that would instantly and silently sign them in to a Google Account the attacker controls. Today, this can be done via SAML single sign-on (SSO), because it doesn’t require a user interaction to complete a sign-in. To protect Chrome users, we’ve added this extra protection.

DO NOT MISS:   Can You Build a Career with Blogging? 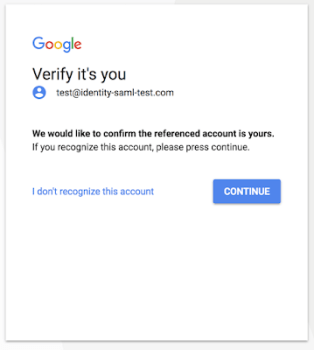 To note, the feature won’t affect all user logins. It’s designed to for securing third-party logins, such as those performed by SAML SSO.

Follow Us
Latest posts by Sumant Singh (see all)
DO NOT MISS:   Soon, You Can Login Into Google Properties Without Password