Samsung’s next flagship Samsung galaxy S9 has been spotted at Geekbench in full glory. The listing indicates phone’s core specifications that we already guessed.

Geekbench listing suggest that the Samsung galaxy S9 might be coming with the company’s new Exynos 9810 chipset, which Samsung unveiled a few days ago. 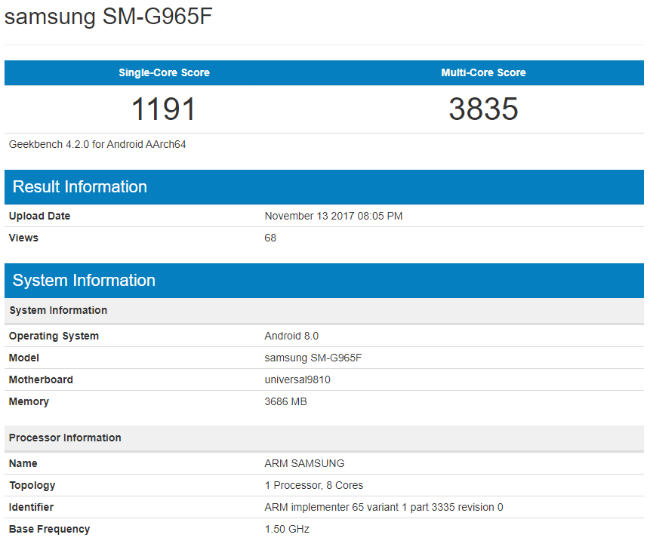 Alongside, the listing even suggests that on RAM front, the phone would follow its predecessors’ way. That means, like its nearest siblings Samsung Galaxy S8 and S8+, the device would feature 4GB of RAM.

It’s being speculated that the Galaxy S9 and Galaxy S9+ the earlier than usual in 2018. The listing hasn’t said much on phone’s configuration but has thrown light over the new SOC that the new flagships might come with.

DO NOT MISS:   Samsung Galaxy Tab S5e Announced: All That We Know

The phone Samsung S9+ seems to be coming with the Exynos 9810. It happens to be the Samsung’s second generation 10nm chipset featuring the company’s 3rd generation custom cores. Listing refers it an octa-core SoC with a base frequency of 1.5GHz.

Other rumors around the Galaxy S9 and S9 Plus are suggesting that the devices will be powered by a Qualcomm Snapdragon 845 SoC and they will be an Android Oreo out of the box based device.  Stay tuned for more on this. We will keep updating this place.

Follow Us
Latest posts by Sumant Singh (see all)
DO NOT MISS:   Samsung Galaxy Feel Launched With 4.7 Inch Display