Facebook has added one more name in the list of its buyouts. The social networking magnet has reportedly acquired social app tbh in a deal that approximates to worth less than $100 million.

The app, quite popular in school students, enabled them answer multiple choice questions about their friends.  The questions given as options in the app are used to be light-hearted and meant for more user encouragement. 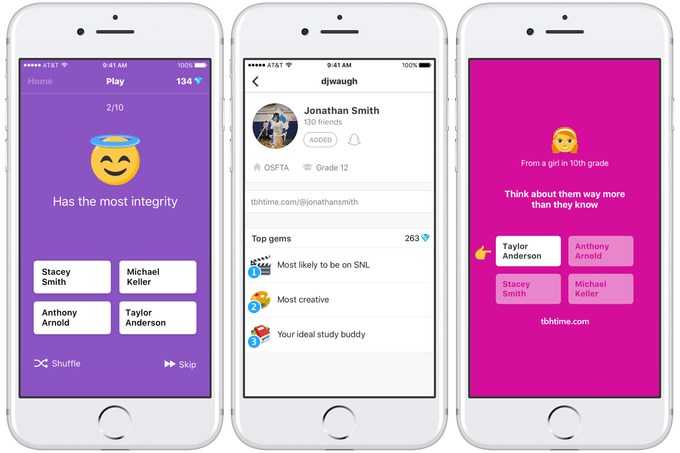 Based on what you answered about the persons, they are awarded ‘gems’. Though, the app keeps the poll participants’ identity anonymous, you can chose to reveal your answer if a user replies to a gem.

DO NOT MISS:   Facebook Tests Destructive Messaging Feature That Deletes Sent Messages After A Set Period

Tbh was launched in August and has been downloaded for over five million times since its launch. The app has four million daily active users as of now, with over a billion poll answers provided so far.

TechCrunch reports that after acquisition tbh will remain in operation as a separate entity, much as WhatsApp and Instagram.

Follow Us
Latest posts by Sumant Singh (see all)
DO NOT MISS:   Facebook Messenger Getting 500 Million Users Each Month : Report