Apple is Gearing up For its News Subscription Service

Since Apple’s acquisition of digital magazine service Texture, there have been speculations that the company may announce its new-subscription model soon.

Preview of the landing page of Apple News Subscription Service was recently spotted with the latest iOS 12.2 beta update. 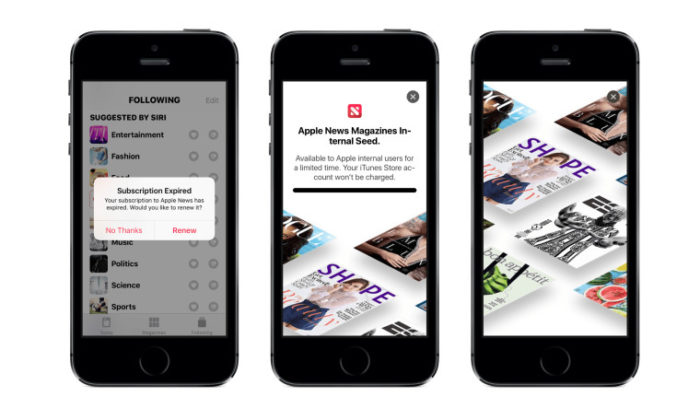 The screenshot above shows that Apple’s latest news-subscription service will give users premium access to newspapers and magazines.

May have the name Apple News Magazines, the service will bring premium content to its readers from leading publications including Shape, Vogue, and Bon Appétit.

It’s also being said that Apple may utilize its iTunes store to manage and collect the fee paid against the subscription. It’s yet to be revealed how much Apple will charge as the subscription fee.

DO NOT MISS:   WhatsApp Beta For Android Gets New iOS 10 Style Emojis

Furthermore, we don’t have any clues as well on availability date of the service. It’s rumored that Apple can announce the news somewhere in March.

The service consists of original TV shows, Apple Music, and magazines. Therefore, we can expect a streaming bundle from Apple could be launching in the near future.

Follow Us
Latest posts by Sumant Singh (see all)
DO NOT MISS:   WhatsApp Payment Feature Arrives on iOS and Android Beta

5Shares
wpDiscuz
0
0
Would love your thoughts, please comment.x
()
x
| Reply
We use cookies to ensure that we give you the best experience on our website. If you continue to use this site we will assume that you are happy with it.Ok