The first ever NSX came into production in 1991 and was manufactured by the name of Honda NSX. It was discontinued in 2005 and after waiting for 10 years, Honda brought back the legend in 2016 under the name of its luxury subsidiary Acura. 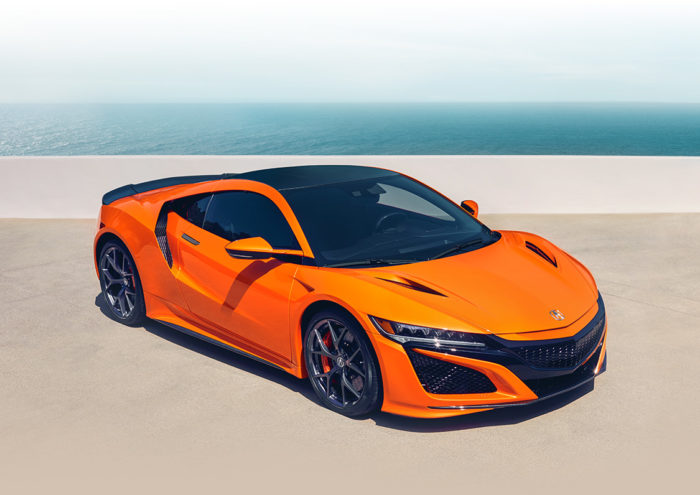 The 2018 Acura NSX is a hybrid car that has a combination of one 3.5-liter V6 engine and three electric motors. It is the only supercar available from the house of Acura and boy-oh-boy does it look fantastic.

NSX is powerful, stylish, and a tech savvy sports car priced at $156,000 which is lower than its Italian counterparts. Let’s see how good a performer it is in the review below.

Acura NSX is unchanged since its launch in 2017.

The Acura NSX is the costliest car from the marquee and gets only single trim to choose. There’s no other engine option to opt for the NSX either. 2018 Acura NSX Price starts at $156,000 and you can spend over $50,000 on various packages available.

The engine that Acura NSX carries is a 3.6-liter V6 paired with 3 electric motors that make a total of 573 hp. Acura is also one of the most advanced supercars in the market. Its V6 engine’s extra bit of torque is used to charge the 3 batteries so that they remain fully charged and can make use of the 573 hp wholly when required.

DO NOT MISS:   Affordable Therapy: Options in Your Budget

The 9-speed automatic dual-clutch transmission is buttery smooth and its low gear ratios helps keep the engine in power-band.

The engine works in a way that the turbo-lag from the V6 gets covered by the electric motors hence, no power loss can be felt. It covers the first 60 MPH in just 3 seconds, thanks to the NSX launch control.

It is a sports car and Acura knew that the handling needed to be crisp and sharp. We’d say that they have succeeded in doing so. It is a car made for enthusiasts having a potent engine with exceptional handling prowess.

The car drives pretty stuck to the ground and can corner confidently at high speed. NSX has SH-AWD which helps counter the understeer around the corners.

It is the only hybrid supercar that can produce over 500 hp with ease and still be efficient. It has a mileage of 21 mpg in the city and 22 mpg on the highway which is better than all its competitors.

NSX has a beautifully sculpted cabin but still has an uninspiring feel to it. The red accents inside give it a sporty feel and those red-hot sports bucket seats are cushioned for the comfortable ride.

The cabin is airy and you get good outside visibility. Interior materials are top-notch and the use of high quality material on the dash makes it even more appealing.

Acura NSX is an architectural marvel in terms of design. The designers at Acura have done a commendable job making a car so good looking. It carries a low-slung and wider stance. It has air-vents on the sides so that the heat from the rear-mounted engine can be replaced with some cool air.

DO NOT MISS:   Top 20 Technology Quotes From Experts

NSX gets some safety features like hill-start assist, multi-angle rearview camera, front and side airbags, curtain side airbags with rollover sensors, a driver’s knee airbag and more standard safety features. However, it lacks some of the necessary safety feature like forward-collision warning or active –lane control which are necessary for a supercar.

Looking for a sports car that has extraordinary performance, good fuel economy, ergonomic design, and has lower emission than the rivals? 2018 Acura NSX is the one to look for.

It is available at a much lower price than the Italian exotics and offers almost similar thrill and hair-raising experience that one demands from supercar.