5 Easy Steps to Write C++ Code on Your Mac

Nothing feels worse than being unable to develop on your favorite device or machine. Although the support for Linux and windows in the world of development is quite mesmerizing, little do you know that Mac OS also possesses a great ability to provide the perfect development environment.

C++ is one of the most difficult languages not only in terms of code writing, but since it’s a compiled language it’s not cross-platform by nature, and the source code for these compilers is usually private.

However, C++ is one of the most famous and most powerful languages out there, and the amount of things it supports is just astonishing, it’s quite a master of all trades. It’s used for drivers, games development, application development and the list is quite long, there’s so little that you can’t do in C++, and it’s usually a matter of practice and knowledge.

Apple’s XCode is a full-featured IDE that supports development, and graphical debugging in C++. Although it is originally intended for Swift and Objective-C development and is usually used within that scope, it strongly supports C++ development and is used by many students since it’s free and quite powerful. As a C++ developer, you’ll have to appreciate the graphical debugging feature, as C++ gets complicated and gets out of hand, debugging is how you can get things on the right track again.

The newest version of XCode allows you to use VCS and full support for GitHub, linking your GitHub account to your XCode’s. As a powerful IDE, XCode supports full project development which is quite an empowering option to use.

#2 Using a Linux virtual machine on your Mac OS

Most of the professional C++ development is done on a Linux platform using the suite of GNU compilers, and debuggers. So to be able to leverage the Linux development power, you might actually want to consider using a Linux on your Mac machine. A virtual machine is an application environment that simulates a hardware environment and allows you to run a different OS on your machine, it’s something like a container, or so to speak.

The steps required are fairly simple, all you need is to install a virtual machine system, Parallel Desktop or any replacement. Then you’re free to choose any Linux distribution. However, we should note that some distributions come with compilers and debuggers out of the box, while some others don’t. While this approach might be a little challenging to beginner users and student’s, it allows you to go as far as you can with C++. The Linux OS will allow you to shoot for the stars with C++, and that’s why it’s a very rational solution.

DO NOT MISS:   Former Indian President APJ Abdul Kalam Passes Away At 83.

Visual Studio is among the best IDEs for C++ development, and most importantly, the student version is totally free. Microsoft released a Mac Os version of visual studio which brings the mighty power of Visual Studio to the Mac devices. It’s a perfect choice for educational purposes, and is suited to help students hone their C++ skills. Visual Studio allows you to develop full fledged applications, and also offers an amazing suite for debugging and unit tests that allows you to up your development game. It’s also an option used by many

JetBrains are one of the best IDE manufacturers out there. They offer a suite of IDEs for many languages, with a full framework integration and full development support. Their C++ IDE runs on Linux, Windows as well as Mac OS. Unfortunately, however, this is not a free option, so only consider it if you want to have a grip of all the features they offer. The application might be an overkill if you’re starting your journey in C++. It’s always better to run with the free options until you’re well acquainted with the field. It’s worth mentioning that they offer a one year free license for students.

This is by no means an option for professional development and projects, but it’s a very appropriate way of getting acquainted with the language and testing out some of the fundamentals and basics of the C++ language in a catchy way.

However, the default distribution of Mac OS doesn’t include the support for GNU compilers, so you’ll need to install XCode. The IDE doesn’t ship with gdb ( for debugging) any more, so things will get messy when your code gets more complicated and the files grow bigger. It’s meant to be a short and simple solution for trying out your code snippets.

There are a lot of IDEs that you can use on your Mac device, in fact, and some great options, although not as popular as the ones we mentioned are Netbeans, Code Blocks and Eclipse( extremely popular for Java developers.)

DO NOT MISS:   6 Holiday Marketing Tips You Should Not Miss

Making up your mind:

How to choose in between these several options? We usually try to optimize our decisions by human nature, but there are no wrong answers here.

It’s always better to categorize yourself and shape your goal, are you just trying the C++ language? Then the command line of XCode is quite perfect for up to the point you get acquainted with the syntax and the program flow. If you want to start building projects with C++ then you might want to consider running XCode or Visual Studio, they’re a perfect option and are quite student friendly. If you’re going to run commercial large-scale projects, then you might want to consider CLion or Visual Studio enterprise edition.

C++ is a very powerful language, and it is supported across several platforms, it’s also quite intriguing and fun to learn and allows you to grasp some of the fundamental concepts in computer science.

You can find the best C++ tutorials and courses recommended by the programming community on the internet and make your learning curve steep. You can bring  C++’s power to almost every platform out there, and Mac OS is not exception, so with the methods we’ve listed above, you can turn on your engines and start writing C++ all the while shooting for the stars. 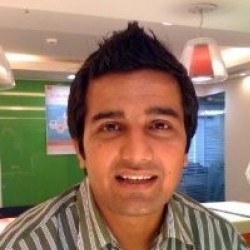 Saurabh Hooda
Saurabh has worked globally for telecom and finance giants in various capacities. After working for a decade in Infosys and Sapient, he started his first startup, Lenro, to solve a hyperlocal book-sharing problem. He is interested in the product, marketing, and analytics. His latest venture Hackr.io recommends the best Java tutorial and online programming courses for every programming language.